Free tours of the Frankenmuth Brewery and dining on a deck along the Cass River were some of its special features that were enjoyed when guests were in the area. Also, Giant StickleMe’s were placed on the beer tanks in the main dining area! Frankenmuth Brewery uses Sticker Genius for a large variety of its marketing products and is happy to join with them in this festive event. 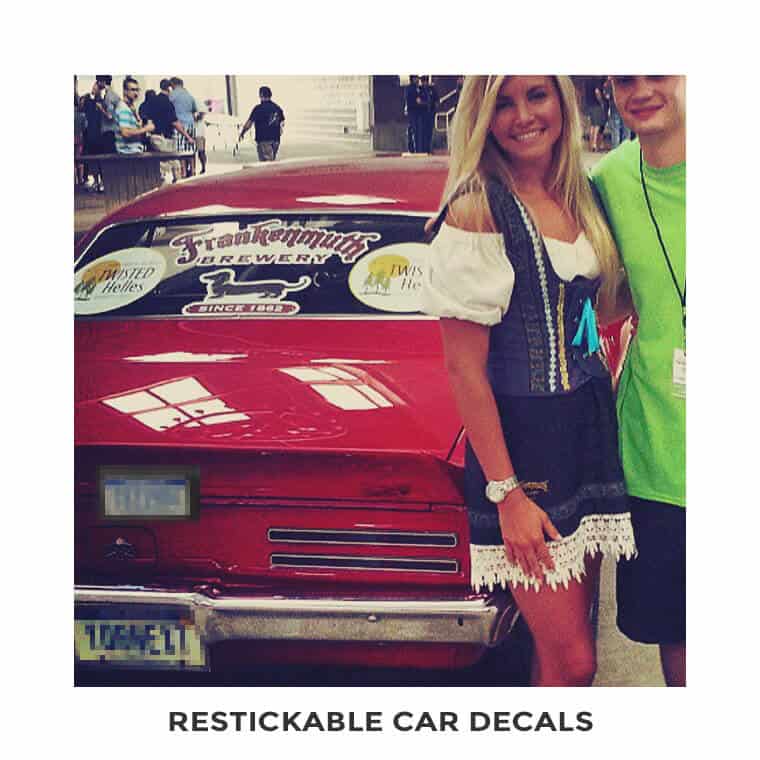 Sticker Genius is a unique company that continues to engage brainpower to design and create green products that use earth-friendly, reusable materials. They participate in fundraising events for schools, sports teams, businesses, charities, and organizations. The Michigan Bier Celebration on July 20 was a day of fun and sampling of the best products that breweries have to offer. Sticker Genius Provided restickable custom repositionable products including life-size standups, signs, custom stickers, decals, car decals, custom decals, banners, restickable photos, repositionable signs, and restickable logos. 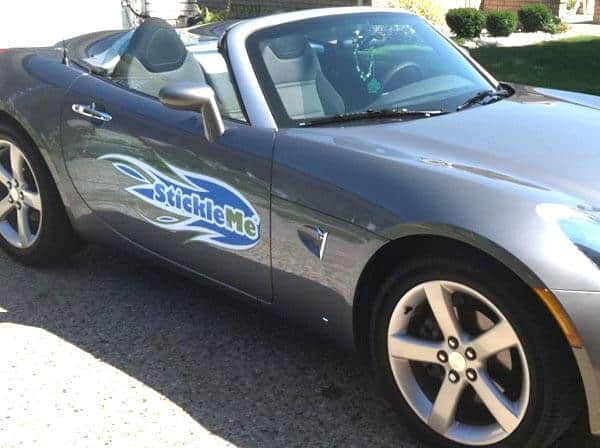 Restickable StickleMe’s are especially useful because they are easily applied and removed without damage to the car. This means they can quickly be swapped out for a new advertising campaign to keep a company’s image fresh and unique. The price point is at least 50% less expensive than long-lasting vinyl. Allowing companies to justify refreshing annually. Today, more people than ever are faced with long commutes. For many, time spent on the road and in traffic has steadily been increasing. This can be an excellent time to get your message across to a captive and bored audience. Cars in our society are present everywhere we go, from shopping malls to the drive-thru. This makes vinyl vehicle graphics and vinyl window graphics an excellent way to keep your product or service on the consumer’s mind in every environment.

Research has shown that mobile billboard systems such as vehicle graphics can perform at a stunning 94% to 97% recall rate, which is over twice as effective than a traditional billboard. In addition, almost 100% of respondents surveyed believed that the use of these mobile graphics was more effective than a simple billboard. A separate report found that sales increased over 100% during a mobile graphic campaign. Mobile graphics such as vinyl vehicle wraps have been shown to be far more noticeable and memorable than traditional advertising techniques.

Due to the very nature of mobile advertising, vehicle advertising stickers can be introduced to a multitude of environments and demographics with ease. By simply driving to a new area, a company can reach many more viewers than a traditional stationary advertisement.

This benefit also makes it extremely cost effective. Rather than spending a large amount of money buying a myriad of billboards in different locations, a single car with vinyl graphics only involves the initial cost of the graphic wrap. This means that vinyl vehicle advertising has an incredibly low cost per impression compared to other methods of advertisement.

Despite the clear benefits of this advertising technique, not many businesses have adopted the use of vehicle graphics yet. This means that those who do still have the opportunity to stand out among the crowd before this type of advertising becomes commonplace. A flashy repositionable vehicle advertisement could be the investment of a lifetime for new startups and established companies alike. 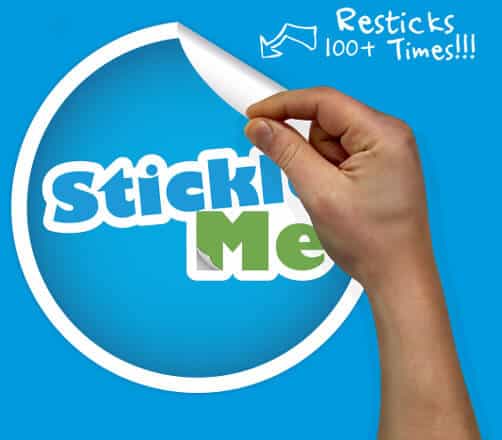 What is a custom reusable StickleMe sticker? StickleMe is our truly reusable indoor/outdoor sticker that sticks to almost any surface, even hard to stick ones.  Even better, this amazing material can be peeled and restuck over 100 times! This specialty material has a unique adhesive that not only allows it to be completely restickable, but it will also never leave a sticky mess or residue behind. There are a few surfaces that StickleMe is not recommended for, so this material is truly amazing in it’s restickable properties.

Available in white material only, but custom shapes and full color prints eliminate the need for clear background.  No matter how much you pull, tug, or fold StickleMe stickers, they’ll bounce right back to their usable form. When a vinyl sticker doubles over on itself, it’s practically impossible to pull it apart again. Vinyl stretches out of shape and tears under pressure, but StickleMe’s won’t. StickleMe custom stickers cling to any clean surface but peel off with ease. As long as their adhesive backing stays clean, they’ll stay put for as long as you like.

Made of 100% polyester fabric that does not contain plasticizers or PVC. StickleMe images are biodegradable from their aqueous inks to their paper-thin material. Also class A fire rated, non-toxic, eco-friendly, and phthalates free these decals are trying to change the way we all do stickers. Because StickleMe decals are biodegradable they won’t harm surfaces or the planet.

To Sum It Up, StickleMe Is: